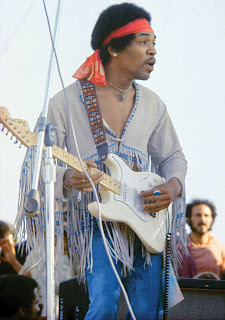 Jimi Hendrix is a guitar legend who, unquestionably, doesn't need any introduction.

He has his share of admirers and detractors but there's no denying that people still listen to his music for inspiration, even after his untimely demise more than 40 years ago. His musical genius was way beyond his time. The showmanship, braggadocio and over-the-top nature of his live performances were unheard of during his era.

But enough about Jimi. Let’s talk about his Woodstock Strat!

As expected from a guitar player of his stature, Hendrix was the owner of several guitars. One of his most well-known guitars was popularly known as the Woodstock Strat. His other equally famous guitar was his favorite, Black Beauty, a black Fender stratocaster.

This legendary guitar is a 1968 Olympic White Fender Stratocaster, bearing the serial number #240981, that he bought from a music store in New York. Its body was made of alder and has a maple neck/fretboard setup.

Hendrix played the Strat at the Woodstock Festival in 1969, including on his famous rendition of "The Star Spangled Banner". Hendrix purchased the guitar in 1968 and played it at many concerts including the Newport Pop Festival and his final concert at the Isle of Fehmarn in September 1970.

It was sold to Paul Allen in the 90s and now rests in one of the rooms of the Experience Music Project Museum in Seattle. Since then, it has been in the Seattle-based museum's permanent collections.

The Woodstock Strat was recently played by Kenny Wayne Shepherd during a live performance at the Jimmy Fallon Show last November 2010.

I was thinking that a guitar of such iconic magnitude definitely transcends being played again by anyone less than Jimi himself. But in the end, a guitar is a guitar. Frankly, I’d definitely want to try my hands on Jimi’s Woodstock Stratocaster. Now wouldn't that be a treat.

Here’s a video of Jimi Hendrix performing a stupefying, face-melting rendition of “Red House” at the 1969 Woodstock Festival using his 1968 white Statocaster, known as the Woodstock Strat. Prepare to be blown away!